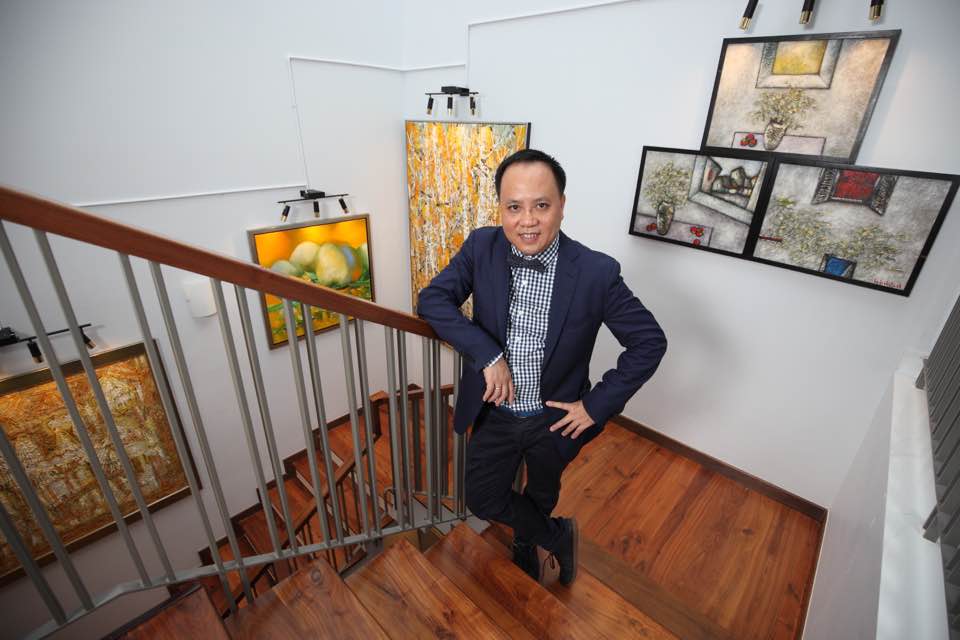 Although just started collecting for nearly four years, he has had in his collection about 200 paintings of well-known artists such as Nguyen Trung, Ho Huu Thu, Tran Luu Hau, Dang Xuan Hoa and other young artists. Not only collecting for pleasure, he also wants to help young artists to unlock their full potential. That is the reason why he has decided to become a sponsor of Viet Art Today 2016, which is organized by Young Artists’ Club (Ho Chi Minh City Fine Arts Association) and has Galierie Nguyen as its main sponsor.

* How did you venture into the world of art collecting?

- Recently, in 2012, When I moved into my current home I decided to purchase some artwork as decor. A friend of mine introduced me to Ben Thanh Art.  I bought two pieces and placed it in my living room.  As days passed, I began to appreciate how truly beautiful they were.  My wife and I returned to the gallery and were bent on a Tran Luu Hau masterpiece.   However, the $7,000 price tag was a bit steep for us.

When I turned back home, I wondered why there was such a huge difference in price, so I started studying Vietnamese paintings. I also took the chance of going on business trips overseas to visit museums in Europe and U.S. When coming back to Vietnam, I immediately went to Ben Thanh Art and decided to “invest” in paintings because I had visited many places, observed and studied about paintings, I found that Vietnamese paintings were beautiful, but too cheap compared to international price.

* Whose works are in your private collection? And what are your criteria in selecting pieces to add to it?

- I have a modest collection compared to more serious collections. I only seriously started collecting four years ago. I want to have more, but I take it slow, I buy paintings simply based on my own feeling and emotion. I have around 200 paintings, mostly by Tran Luu Hau, Dang Xuan Hoa, Ho Huu Thu, Nguyen Trung, and so on. There are a few pieces by young painters. There are a few young painters nowadays but none of them have captured my interest yet.

* Acquiring paintings directly from artists’s studios is normally more economical, and a good way to interact and build a relationship with the artists themselves. Then, why should one from acquire from galleries?

- Reasons are abundant. It is true that buying the works directly from studios is a better way to build relationship with painters and share with them the inspiration of the works; but from other perspectives, it may not be necessarily the case. For example, many people think that it is cheaper to buy the work directly at painters’ studios. Well, not necessary! The galleries often offer special price for frequent clients. In addition, they have long-term business with the painters, so they’ve got the better price than individual buyers, who only buy a few paintings from the studio. More importantly, I buy a painting for the painting itself, but not for special preference to the painter himself, so for me it’s not necessary to meet the painter face-to-face. Sometimes it’s better this way because something vague and mysterious can be more beautiful than being totally visible and clear.

Furthermore, the gallery provides full service, the invoice and contract are clear and eligible, and the service also includes making frame, packaging, delivering, and so on. Especially I can change or resell the paintings to galleries, which is not possible if I buy directly from the painters. I prefer doing business with firms rather than individuals for this reason. It’s easier to negotiate price with firms, and they also provide a more diverse choice. The choice at painters’ studios is less diverse since the good ones have already been taken by the galleries.

*Which galleries gave you such belief?”

There are many galleries that I know of, but most of my acquisitions have been made through Ben Thanh Art Gallery and Galerie Nguyen.

* Most of the painters and galleries do not repurchase the paintings they already sell to customers, and neither do they have a compensation policy for low quality or fake paintings. Are these obstacles that discourage buyers and collectors?

I buy from galleries, so when I want to return or change, my request is honored  immediately. I’m not sure if that is because I am VIP client, or every client is treated equally. I really don’t know! (Laughs out loud) In my opinion, any piece of art must have a “commercial value” and not just as pure ornamentation. If this doesn’t change, no one will dare to invest in art.

In Vietnam, low quality paintings are rampant - whether it’s a fake or a “re-paint”. However, if you have a keen eye and work with the reputable galleries, you will be very pleased with the art that you buy.

* If commerce is the pure driving force in the art market - artists may choose to product work that is “marketable” or “clones” of their previous work. This would definitely bore the audience, don’t you think?

- Definitely! As a collector, I find most of the artists now create according to the market’s preference and “create” work that is similar to what he/she has already produced. I don’t know why some artists with real talent prefer to stick to a “tried and tested” formula. Maybe they are not confident enough to create something different from what they painted for their own ego?

Therefore, I very much support this competition by The V Art and Galerie Nguyen to find young professional painters, let them paint whatever they like. The gallery will sponsor and accompany winners by supervising the quantity and quality of the paintings. It’s better that way and there will be a secondary market as well as enable professional investment, given the condition that they (galleries and painters) collaborate in long-run. In this competition, the galleries offer a five-year contract term to winners, but in my opinion it’s almost nothing yet because after that five years, when the painters may start gaining some prestige then the galleries expire the exclusive contract; or the other way around, the painters become famous then they end the exclusive term themselves. Either way, the painters become freelancers again, no one supervise quality of their works. Without a protocol in long-run then the competition organizers’ commitments will come to nowhere. In my opinion, if The V Art wants to create a more professional protocol, the exclusive contract term should be extended to 20 years for young painters and 10 years for painters who have already gained some prestige; in this way, it also enables the professional investment in paintings. It is obvious that for The V Art or any gallery want to go in “exclusive” direction, it must have a good foundation, capacity, vision, and dedication to art. “Exclusive” here does not simply mean presenting a painter then imposing orientation or exploiting his work, which deteriorates his creativity, which is the utmost power of an artist.

* Based on your experience in the fine art market, do you think there is a viable solution to this problem?

- I think the solution is evident. It requires a collective effort among buyers, collectors, artists and galleries to act professionally with a long-term orientation rather than focusing on temporary short-term benefit.

At the same time, it also requires the mutual trust, integrity, honesty and the aim towards a mutually beneficial and sustainable agreement.